I was amused by a story in Britain’s Daily Mail last week of how an entire police force in southern England
became the butt of jokes after appealing for witnesses to the theft of a packet of Scotch eggs worth 1.65 British pounds. (Php122).

A woman was caught on CCTV walking into a shop and picking up these traditional British snacks before eating them and leaving without paying.

The police apparently spent a month investigating the crime before launching an online appeal in a bid to identify the woman.

Scene of the ‘great Scotch egg robbery’ in southern England

However, the petty nature of the offence led dozens of web users to mock the force for its over-zealous policing.
Police has now deleted the appeal, after a witness came forward claiming to know who the thief was.

Amusement aside, I was reminded at just how delicious Scotch eggs are – that’s probably why the woman couldn’t resists them.

A Scotch egg consists of a hard boiled egg wrapped in sausage meat, coated in breadcrumbs and fried. There are also mini versions using quail eggs.

Fortnum and Mason, the famous London department store which supplies members of the Royal family, is said to have invented the Scotch egg in 1738.

They are usually a picnic food and home-made, though they can also be served as a main course with gravy and vegetables.

Although it’s a traditional British snack, similar dishes exist around the world including here in the  Philippines. Kwek-kwek are eggs with orange breading sold as street food dipped in vinegar, sweet and sour sauce or gravy.

In the Netherlands and Belgium, Scotch eggs may also be called vogelnestje (‘little bird’s nest’) because they contain an egg.

Brazil also has a dish that is very similar, if not a version, of the Scotch Egg called ‘Bolovo’. It also features an egg in the center but the dough does not contain any meat.

When I’m making pica-pica, this is my Scotch egg recipe. 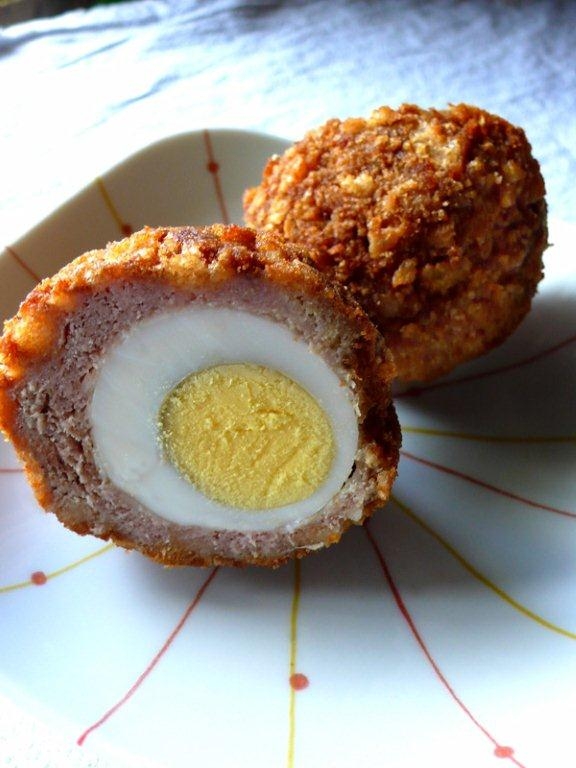 Dust the hard boiled eggs in a little flour. Mix the nutmeg, salt and pepper with the sausage meat and divide into five equal portions. Place on a floured surface. Wrap/mould the sausage meat around the egg, making sure there are no gaps. Beat the egg and water together and coat the meat-covered egg with this and then breadcrumbs (you may have to press the crumbs onto the meat).

Deep fry in hot oil (360F/185C) taking care as you put the eggs into the oil. Cook for about 5/6 minutes. If you don’t have a deep fat fryer, they can be cooked in oil in a frying pan, turning frequently to ensure the meat is fully cooked. Drain and serve hot or allow to cool and keep in a refrigerator for a cold snack later.

The Scotch Egg Challenge takes place in England each year

Remove any bones or rind from the pork, and pass through a mincer. Mix in the bread and season generously. Pass through the mincer again. Fry a little of the mixture to test for seasoning adding more herbs and pepper if necessary.